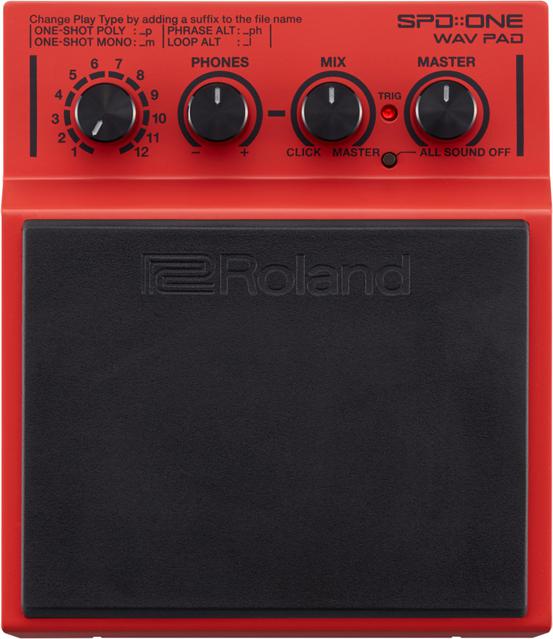 YOUR OWN SAMPLES, BACKING TRACKS, AND CLICK TRACKS—IN THE PALM OF YOUR HAND

The Roland SPD::ONE WAV PAD is a new type of digital percussion pad, one that allows any musician to perform with their own sounds and samples. Importing audio files is as simple as connecting the SPD::ONE WAV PAD to a PC or Mac and dragging your WAV files into the drive that appears. Whether you need full-length backing tracks or one-shot samples, your sounds can be loaded and played in seconds. Once you’re ready to go, the unit’s robust-yet-sensitive pad can be played with sticks, hands, or feet, and trigger threshold settings are easily adjusted with intuitive controls.

Powered by batteries or AC, the portable SPD::ONE WAV PAD can be used on the floor or a tabletop, or mounted to any rig or drum setup with the included adapter. Operation is simple, even for those musicians who are not technical; just by using four knobs on the control panel, you can change the sound, volume, balance, and more. Whether you’re a drummer, percussion player, guitarist, DJ, or vocalist, the SPD::ONE WAV PAD is a simple and flexible way to expand your sound palette and invigorate your performances.