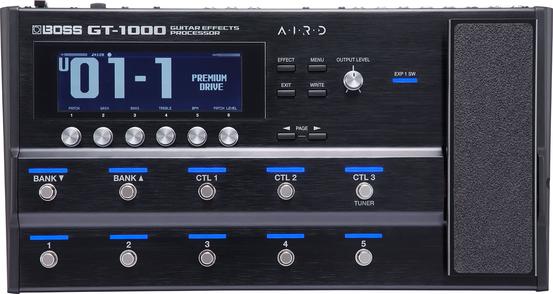 The GT-1000 also features a huge range of cutting-edge BOSS effects to enhance your tones, with numerous routing options and extensive real-time control at your command. And with the convenience of built-in Bluetooth®, you can adjust sounds, configure control assignments, and organize patches wirelessly from your mobile device using the BOSS Tone Studio app. Packing immense creative power in a streamlined pro design, the GT-1000 is a game changer that brings new levels of musical expression to guitarists everywhere.

The BOSS GT-1000 Guitar Effects Processor is an excellent multi effects pedal, offering one of the most customizable and programmable interfaces on the market today. The GT-1000 offers the user dozens of effects, each with their own customizable parameters. As a result, the user genuinely has every sound at their fingertips. The pedal has a really solid chassis, making it perfect for live shows or studio recordings. The footswitches are reliable and effective, without being noisy when pressed – which is really important!

Every effect imaginable is available within the BOSS GT-1000. From overdrive, reverb, delay, tone shifter, ring modulator, phaser, chorus, just to name a few! It even comes with a loop pedal, perfect for practice!

The customisability of the pedal is excellent, however, such attention to detail can make it difficult to properly comprehend all the available parameters. This pedal certainly takes some time to get used to and comfortable with. I would recommend spending some time with this pedal and dialling in your ideal sounds before taking it to the stage.

I recommend this pedal to advanced effects users looking to explore their sound even further in a high-end multi effects pedal. Try it now, and see if the BOSS GT-1000 can take your playing to the next level, and help you Discover Your Sound!