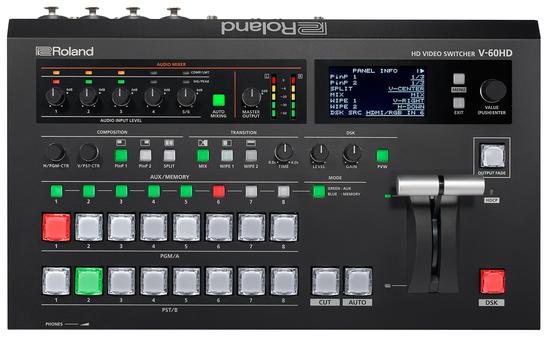 Live event production and streaming continues to grow and the demand for more features requires a sophisticated feature set. The V-60HD simplifies your set-ups and combines the best of both worlds that includes SDI inputs for camera sources and scaled HDMI inputs for data, computer, tablet and other video sources. The combination of powerful audio features that include multi-channel embedded audio, XLR and RCA analog inputs, de-embedded audio from digital SDI or HDMI sources plus a variety of video connections with a Program and Aux Bus makes the V-60HD ideal for a variety of live event production and streaming applications.

The V-60HD is ideal for multiscreen environments usually found in churches, conference centers, hotels, and trade show facilities where different content needs to be switched to independent screens.

Cut, Mix with cross dissolve and NAM, FAM transitions. Use up to 30 different wipe patterns. Time based corrected and frame synched provides seamless transitions between 6 video sources and 2 still images instead of buses. Auto-Scan (Ver.2.0) enables to switch automatically to reduce operator work.

The DSK can be used for overlaying titles, song lyrics, logos or graphics coming from the video sources with up to three layers of composition. The DSK supports both Luminance Keying (Black/White) and Chroma Keying (Blue/Green) for compositing two video sources plus the additional layer of PinP plus your background video ensuring creative live production environments.

Live streams, HD recording, and confidence monitors often have different visual needs from the main program output. Switch any of the connected input sources to any of the four SDI or HDMI outputs without affecting the main PGM destination. AUX Linked PGM enables AUX output to synchronize with the Program (PGM) output.

V-60HD can preview all six video inputs and two still images, PGM and PVW to a single preview monitor via the Multi-view output. In addition, you can display the menu on the Multi-view display, so you make setting changes without changing your focus from the preview display. From Ver.2.0, exchanging PGM and PVW window and editing label name of IN1 to 6 are possible.

A built-in effects library added from Ver 2.5 is packed with presets for common production scenarios including interviews, ambient sound recording, and eliminated wind noise when recording at field. Anyone can easily set up without audio knowledge.

The V-60HDs’ preamp and dynamics effects include a high-pass filter, gate, compressor, a 3-band EQ and delay. Anyone without audio knowledge can run sound thanks to the built-in effect's library packed with presets for common production scenarios including interviews, ambient sound recording and elimination of “pops” & wind noise.
Allowing the AV operator to focus on video switching, the onboard intelligence automatically crafts the perfect mix for conferences and panel talks.

The included Auto-Mixing function ensures the correct mix for multiple panel participants at conferences by automatically adjusting levels across multiple audio sources. A priority weighting assignment that is channel specific can be set giving the moderator or priority audio channel a higher volume level while using the Auto-Mixing function allowing the operator to focus on video switching and production.

Assign up to eight analog audio inputs a separate audio embed channel on SDI 1 and 2 outputs to ensure a separate mix pre-effect (dry) or post effect (wet) for correcting audio problems post live event. This feature is additionally useful for multi-language events to record the voice-over or language translation on its own audio channel to a separate master.